A different kind of Nobel fever in Baku 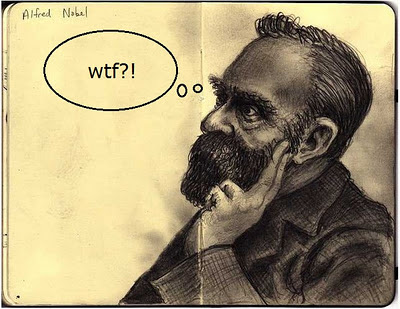 The world just got over the occasional Nobel fever.

Questions of who will get what this year are no longer asked. Eco or Kundera didn't get the literature prize again; we discovered there is a noble poet called Tranströmer; and once again Nobel committee proved they were unforgivable slow, for another laureate died just before he could hear the news.

Nor the Arabs were awarded for their spring. Maybe next year if they manage to defeat Mubaraks and Gaddafis inside themselves.

However, today Baku has a different kind of a Nobel fever.

Azerbaijani universities stuck in the bottom of global rankings have started a competition or rather a coordinated effort to bring Nobel prize winners to Baku and decorate them with honorary doctor titles.

On 28 September, the State Economic University hosted three laureates of Nobel Prize in economics - Eric Maskin, Finn Kydland and Christopher Pissarides. The Nobel laureates made three academic presentations and were made Honorary Doctors by the Scientific Council. The cost of operation was not disclosed.

On 10 October, Baku State University - my alma mater - hosted another ceremony with Ahmed Zewail, laureate of Nobel Prize in chemistry. He was also made a Honorary Doctor of the Baku State. Various media reports about the event had suspiciously the same awful mistakes which I guess could be traced to the official press release.

And today V.S.Naipaul himself was spotted at the University of Languages. He met some students and of course, got the Honorary Doctorate.

And not to alienate the University of Architecture, I'd like to offer some Pritzker for them. Why not Zaha Hadid? She is already familiar with Azerbaijan and frequent guest here.

But the main question remains unanswered - what to do with the winners of the Nobel Peace Prize?
Posted by LIVLIVS MAXIMVS at 5:11 PM