With one face turned toward ‘natives’ and a totally different one – toward the international community, how democratic and ‘new’ is the Republican Alternative?

It seems something is rotten in the Republican Alternative Movement – REAL. Once founded as a beacon of progressive and liberal ideals, and promoting ‘new’ politics to the disenchanted Azeri public, now REAL’s reputation is being tarnished by a strange paroxysm of a political schizophrenia.

It is not in nice press releases, neat interviews to media or private chats with embassy officials that the true essence of REAL is revealed. If you want to get closer to what REAL is about, you should turn to Facebook, the holy ground of Azerbaijani opposition movement.

It is in Facebook that one of REAL’s founders, a current member of its board and current chair of its political council and the first in REAL’s line of succession Erkin Gadirli is manifesting his vision of “a right-wing authoritarian rule”, “five years without democracy” and “harsh measures to clean the political arena”.

For example, in December 2013, in a moment of another revelation, Erkin Gadirli eagerly put forward his following statements: 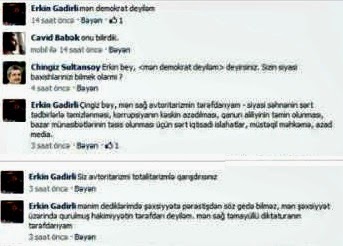 And here is another of his great moments in Facebook where he puts forward his vision for a post-Aliyev Azerbaijan:

Taking into account our geography, history, neighbors, risks, resources and capabilities, I have come to the conclusion: We need to do a lot for a strong, free, fair and wise Azerbaijan. There will also be a need for democracy, but later. Democracy is not even in the list of top 10 that is needed to be done. Democracy should not be perceived as a goal, but a result. That is, democracy should be seen as a side effect of more important things with other specific goals.

Or let’s take into account Erkin Gadirli’s infamous call for poisoning of Armenian leaders, and subsequently arresting scapegoats from “the radical opposition” and trying them in a kangaroo court. One cannot read this without true terror. Isn’t the leader of REAL, “the radical opposition”, Ilgar Mammadov arrested as a scapegoat for Ismayilli riots and tried in a kangaroo court and received 7 years in jail?

Though Ilgar Mammadov showed utmost common sense and issued a strong statement from the jail condemning this irresponsible hate speech, Erkin Gadirli is still unrepentant. In his latest interview two days ago, Erkin Gadirli not only reiterated his statement, but also hurled personal attacks at me for I dared to criticize his speech for irresponsibility and hate-mongering.

Except a single case of Ilgar Mammadov’s statement which was indeed a last-minute lifebuoy for REAL, Erkin Gadirli’s manifestation of ‘a right-wing authoritarian rule’ is still going around unchallenged, especially within the REAL movement.

However, in their nice press releases, interviews and embassy chats, they are still advocating for free media, free and fair elections, independent courts and triumph of democracy.

I’m not a decision-maker in this case, neither I’m a member of REAL movement, but common sense tells me that there are only two solutions out of this ugly situation.