A SPECTRE is haunting the Philharmonic — the spectre of Facebook

The news came first as a joke and then as a shock.

The enlightened despot-director of the Azerbaijan State Philharmonic, a scion of a well-known Azerbaijani musical dynasty, the husband of Aysel Teymurzade, Azerbaijan’s Eurovision 2009 contestant and finally, a celebrated pianist Murad Adigozalzadeh punished several Philharmonic employees for their critical comments on Facebook.

The website that broke the news first is suspiciously down while I’m writing this post, but photos of Adigozelzade’s official decree were posted on the Internet yesterday and it’s an utmost shame, let me tell you.

According to the decree, some members of the State Choir posted critical remarks on their Facebook profiles about “the opening ceremony of the III International Mugam Festival dedicated to the 90th Anniversary of national leader Heydar Aliyev” instead of “disseminating the news of a high class opening ceremony on the social networks.”

As these actions are “contrary to the nature of culture workers and not accepted by the staff of the Philharmonic”, the director decrees to give “serious warning” to the manager of the Choir and its art director, as well as “last warning” and “grave reprimand” to five artists – which means the next step will be firing them from their jobs.

Moreover, the Director instructs the managers of all “creative collectives” of the Philharmonic to watch out for similar incidents and prevent leakage of opinion and talks onto the social networks that might be critical of “the Republic”.

Well, I just wanted to point out that the decree of the Director had already been leaked :) 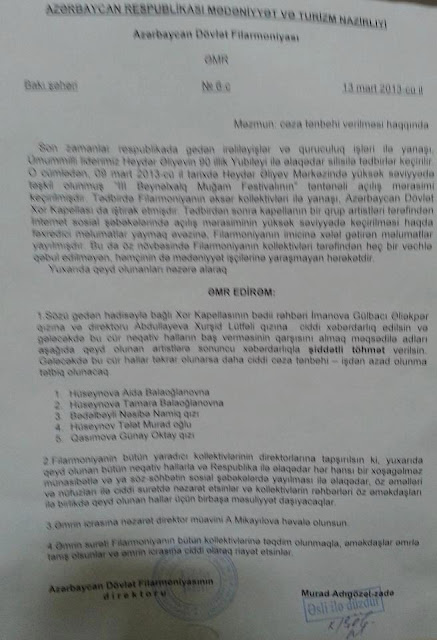 Posted by LIVLIVS MAXIMVS at 1:31 PM